Ryan Seaton & Matt McGovern are a young team of sailors from Northern Ireland sailing in the Olympic 49er class and selected to represent Ireland in the 2012 Olympics in London.  Ryan Seaton & Matt McGovern teamed up in April 2009, Matthew is regarded as one of the best 49er crews in the world and has the previous experience of an Olympic campaign in 2008 with his brother Russell.

We were contacted by Ryan recently after a request for sponsor help was posted on facebook.  We immediately decided we’d love to help the guys get ready for their Olympic dreams by producing a new website to provide information, photos and news feeds to fans throughout the world.

The website http://www.irish49er.com includes dynamic database driven blog content to allow them to keep latest news and twitter feeds updated on the site.  Media galleries of photos and videos will help keep viewers on the site and make sure they return often.

Good luck in the summer guys!  We’ll be keeping you posted on our dedicated Seaton McGovern news page. 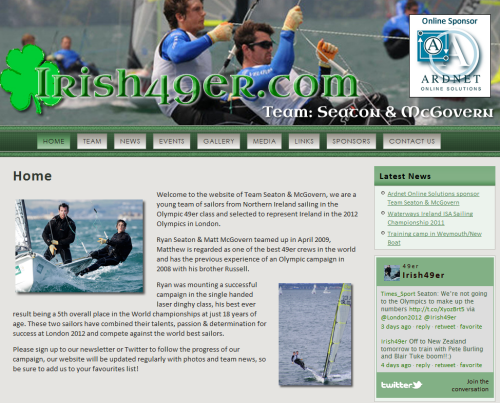